You should spend about 20 minutes on this task.

The following diagram shows how greenhouse gases trap energy from the Sun. Write a report for a university lecturer describing the information shown below.

Energy from the Sun _____ (1) the Earth as heat. Some of this heat energy is _____ (2) radiated into space, while some of it is trapped by greenhouse gases in the atmosphere and reflected back to Earth. This is a natural process, but in recent _____ (3), human activities have _____ (4) an increase in the _____ (5) of greenhouse gases in the atmosphere which is now trapping too much heat.

One of the main greenhouse gases is carbon dioxide, and extra quantities of this _____ (6) into the atmosphere _____ (7) burning fossil fuels as a source of energy in power stations, factories and homes. Exhaust gases from cars and lorries _____ (8) further emissions of carbon dioxide.

Plants serve to remove some of the carbon dioxides from the atmosphere by absorbing it through their leaves. However, as large areas of forest _____ (9) in the Amazon and elsewhere, _____ (10) carbon dioxide is removed in this way.

6. are released / have been released

8. result in / have resulted in

9. are felled / are being felled / have been felled

You should spend about 20 minutes on this task.

The diagram below shows how the Australian Bureau of Meteorology collects up-to-the-minute information on the weather in order to produce reliable forecasts. 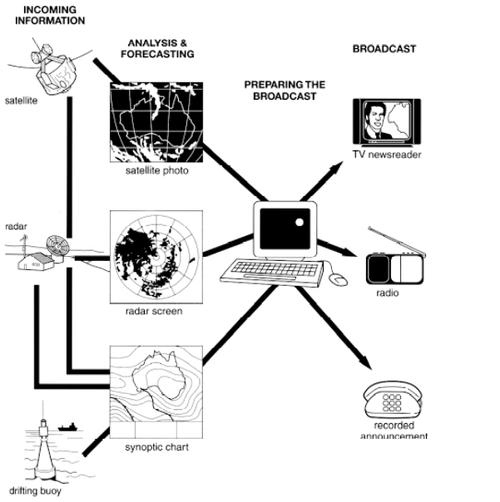 The figure illustrates the process used by the Australian Bureau of Meteorology to forecast the weather.

There are four stages in the process, beginning with the collection of information about the weather. This information is then analysed, prepared for presentation, and finally broadcast to the public.

Looking at the first and second stages of the process, there are three ways of collecting weather data and three ways of analysing it. Firstly, incoming information can be received by satellite and presented for analysis as a satellite photo. The same data can also be passed to a radar station and presented on a radar screen or synoptic chart. Secondly, incoming information may be collected directly by radar and analysed on a radar screen or synoptic chart. Finally, drifting buoys also receive data which can be shown on a synoptic chart.

At the third stage of the process, the weather broadcast is prepared on computers. Finally, it is delivered to the public on television, on the radio, or as a recorded telephone announcement.